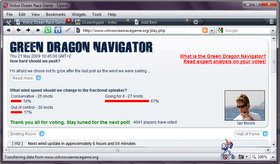 For all their dreadful website's dreadfull problems. Me and pretty much every other geek-come sailor is horribly addicted to The Volvo Ocean Race game. Sad I know. Its fun though.

I've sailed on a few yachts and managemnet by committee fails really badly. Open up the tactical decisions to the entire boat and your'll be last. Will turn any yacht into a 4 knot shit box.

So what have they done in the Volvo Game? Well theve added a dayly questionaire to the game allowing vote reality TV style as to what advice to give to Ian Moore the Navigator of Green Dragon.

Fourtualty for Green Dragon its only advice - hed doesn't have to take it, and he's got some pretty hot software to help him too. My advice to Ian is get some "la-La-I'm-not-listenting" musical finger head phones. There's sound tactical reasoning behind this not just contempt for my fellow arm chair sailors.

Looking at what advice is being voted for I'm seeing a classic case of normal distribution. Since the question's always seem to be three options.A: Do one thing B: do another Or C: half way house inbetween, its always the in between that gets chosen. Now that will not do well for Green Dragon. Its generally achnowleged its not the fastest boat in the fleet. The reverse probably. That didn't stop them scoring the first major points of the race by a bold and unconventional tactical move left the rest of the fleet in the doldrums, then force to tack to make the Scoring point.

No move like that will come from the normal distrubution of votes on an online multiple guess. So online web two-point-oh navigation for yacht racing FAIL.

For referece I've already addmitted to Gybing my virtual boat at 4am when getting up to go to the Loo to Brian (boat name bsccommodore) so I'd better come clean publically.

Paddle round the Pier

This years Paddle Round the Pier, great fun for all the family, great event hope to see you all there. I'll be driving a rescue boat. Volanteers are urgently needed as are people with Ribs etc. See their website for more details 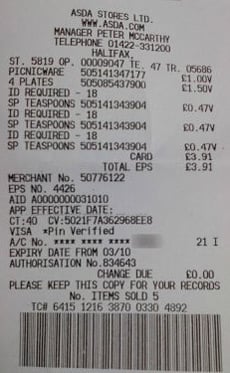 Asda is "Clamping down on killer teaspoons" It won't sell you any unless you have ID to prove your over 18. People have been killed, yes murded by teaspoons. Probably by some Kung Fu monk. FAIL.

In other news I've bought a new sailing knife. Sheath knife 3.75 inch blade. Ordered it off the inernet. No checks. Had it deleivered to the XI form college I work at.

EH? I can buy a knife, not a blunt bit of cutlery, a propper cut's high tech sailng rope sheath knife and post it to a school but I need ID for teaspoons. Is it me or is there somthing seriously wrong with this.

No it bloody doesn't, winamp as every one knows whips the lama's ass. Not the lama's lame-o-sound-effect. It politial correctness gone mad.

Oh and all windows users who read my scathing review of windows 7, I have some caveats.

SInce I wrote the previous  artical on windows 7, I've been forced to spend some quality time with Windows Vista. God Damn. Makes windows 7 look good.

WIndows 7 RC1 is now out and they've got rid of some of the more garish colour schems. Gone also is most of the drowning motif. They've copied twitter this time.

Some things still stand, new laptop (formerly running viata) is a high powered hi spec X series ThinkPad. Possibly the best brand of laptop ever. So things work better than they did on the crap desktop.

Most of what I said goes, for gods sake DON'T use either vista or 7 on anything cheap or old. If your stuck with vista, MS alow a years worth of windows 7 RC1 for free, GET IT NOW IF YOU ARE A VISTA USER. No seriously do it NOW.

Tom, off to whip Vista's ass.