Well its just after sunup, 11° from the equator, I'm wearing jeans and 2 jumpers, and I still have cold feet. 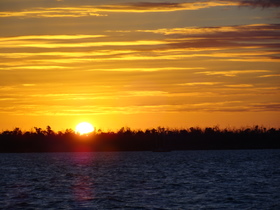 Dawn In the Territories

Pete's American and a fan of peanut butter and jelly sandwiches, or jam as we call it I like Vegemite on toast. He says Tomaito I say Tomarto. I refuse to call biscuits cookies. Yesterday we broke a bit of boat. I had a broken kicker, he had a broken vang. I think we may have to call the whole thing off.

I never get seasick, however, I cannot stand the smell of peanut butter It makes me sick. He can't stand Vegimite. We have to make our own sandwiches. On a completely separate note the French - famous for their culinary ability have been brung low by the modern world and live entirely on Nuttella sandwiches these days, hours of fun can be had chasing French backpackers with a piece of Vegemite on toast, they universally fear the stuff and will run screaming has you wave it like a pikeman at Agincourt.

Pete's been married to Margie for a long time. When I came aboard, he, I thought, optimistically said "Can you cook?" I said "no" - I'm not suicidal. Actually I can cook, quite well compared to Pete, we're doing OK. Margie, Margie, Margie you've been far far too good to him. Margie's spoiled him rotten, she does all the cooking, and even brings him breakfast in bed. I'm blowed if I'm doing that. Last night's dinner was roast potatoes tinned carrots and fresh Tuna fried in butter garlic and onions. I cooked that. I gutted it as well, Pete did the filleting. Neither me or Pete are much cop at cleaning fish it was a long and traumatic operation - with with VHF radio support  from easy rider and Aussie catamaran anchored in the same bay as us. We reckon we should have a Guinness  world record for most inefficient fish filleting. That said it was a big fish and very tasty. Out of 4 generous portions we've already eaten we've had only 2 bones so I think we did OK.

If the politicians, military, mad scientists and Jesus freaks would please refrain from starting WWIII, causing the apocalypse, releasing a plague of zombies or rapturing the god botheres please because people like me (and Pete) do not have the skills to survive in a post apocalyptic wasteland.

The catering problem is further exacerbated by Pete's misspent youth in  Peru, where he once tried raw Peruvian Insanity Chillies (it was the 60's people would take almost anything back then) the resulting mouth damage has left him with a distaste verging on phobia for spicy food. I can't cook much, but most things I can cook are spicy. I like spicy. It means I can't cook. 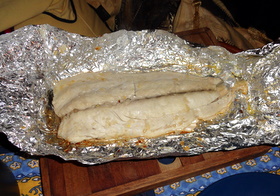 We had to get the "Sunbrella" repaired in Gove, we were very lucky Gove's not a big town. I've never heard of a sunbrella nor I'm certain has any one out side the United States of "Whatever", so the conversations relating to finding, recruiting explaining and answering other yachties queries about what we were doing consisted of Pete talking and me injecting the Phrase "UV Strip" every time he said "Sunbrella" to stop the blank looks. For you not yachters a UV strip is some canvas like fabric sewn on to the edges of sails so that it acts as a cover when the sail is rolled up - stops the UV from getting to the sail. Until you really get down to it you don't realise just how different American English is to UK English. Its not the spelling or the language its the terminology. Tomaito, tomarto, Zukini, Courgette, egg plant, aubergine, jelly, jam, biscuits, cookies, mince burger meat, the Galley's a nightmare.

That's before you have to deal with the Imperial system, England has been resisting the Metric System for years, the truth is they haven't its been universally adopted, its only when you talk to Americans who actually use it think in it and work in It you realise how little of it is left, I can't now think of a UK sailor who thinks in Feet and Fathoms. In reality we use meters universally. Likewise I don't believe the weather on the telly even mentions Fahrenheit any more. We've got a few hang ups like miles and pints, but when we cook we use metric - we drink pints but we'd never calculate based on them. I guess its like Clint Eastwood  in Firefox "Must think in Russian", I can't think in imperial I have to convert. Pete THINKS in imperial. He has to think out loud and to be honest Its probably quicker to do the conversion and do the nice decimal maths than it is to think it right through in Imperial. (FYI US Pint = 16foz UK pint = 20foz just to make it more confusing - we don't even have the same imperial system)

2 am the night before last night this voice goes "Time to cook the doughnuts"  I'm sleep deprived and not awake, this made very little sense to me. One good nights sleep and a coffee later and its been explained to me that its a Dunkin Doughnuts advert from the US involving a zombified employee trying to imply the doughnuts are fresh every morning. As a call for me to come on watch it just confused me. I'm used to being woken for emergencies but doughnuts aren't one of them usually. "Cultural differences"

Pete's boat is well sorted for an American boat. Its a one ten volt AC but he has a transformer to step it down from 240 volts - many US boats you meet can't use shore power. The telly doesn't do PAL so he can't receive local telly, fair enough Island Kea couldn't do NTSC. The difference is European standards rule the world. The American ones don't get further than South America. So we missed out on telly in Panama City Pete's missing out on Oz.

I'm wondering how long the Imperial System will survive in the US. The US is so different, in buoyage, telly electricity - but its the last bastion of the imperial system  its caused many a nasa cock up. Its unwieldy and awkward. Will they dump it?

Anyway - look out for the "Hole in the Wall" video coming soon...

Back in the Northern Territories, I've made progress on Pete, but he's still not really up to speed with just how sparse bits of Australia are. I didn't manage to get through to him that North of Cairns it gets patchy, and north of Cooktown its pretty much empty all the way to Darwin.

We're in Gove a mining town on Aboriginal land on the corner of Arnhem Land, its got a Bauxite mine a decent supermarket a small yacht club and a club in town and probably the only decent coffee machine on the entire coast between Darwin and Cooktown. To buy booze requires a permit which you have to apply for. Its got metalled roads but only local ones, its 700km odd of dirt till you hit the Stewart Highway after that. This probably makes Gove one of the top ten towns in the NT - not counting Darwin's suburbs. Alice is a big town, Tenants Creeks and Katherine are towns then there's Wyndam and after that I'm struggling to find anything bigger than a village. The NT is huge, you could drop the UK into it and not touch the edges I suspect. The population is apparently 200,000. Or less than Brighton and Hove - which is only just counts as a city in UK terms.

At Cooktown some 600km south of Cape York you run out of metalled road on the East coast, we've just sailed across the gulf of Carpentaria another 600km, not quite certain but I don't think there's anywhere on its probably 1800km coastline where you can get out without a dirt road. Hell even Darwin's only connected to the rest of Oz by the Stewart Highway right across the continent to South Australia, and branching of it one strip of tarmac called the Barkley to Queensland and another to Wyndam and then on to Broome in Western Australia.

So yes, Gove's a pretty big place - we've found someone to repair our Jib and everything. That's the think about the outback. It takes, especially in wet season, so much trouble and cost to get things in and out, that even in a tiny place someone will be able to fix it. Whatever it happens to be. Cos there's no choice. Now in Brighton a city of a Quarter of a million, there's no real sail maker. There are a couple of people who'l patch conventional sails - as we're hoping this guy will. But a racing sail, well you'd probably have to get it to Hydes in the Solent, then they'll package it up and send it to Asia, who'll fix it and send it back.

So who's insane now? I think its the city of a quarter million who's sail makers have been replaced by air freight to Thailand from a city and hours drive away?

That said, I've spent some quality time in the outback. The outback can be defined as "Where every car you see is a white 4WD Toyota ute". Gove super market car park is errr, the odd (white) Toyota land crusier and a lot of Toyota ute's (pickups).  Pete hasn't I'm not sure he's got his head round it. Last place we stopped was Sesia. Population 200, one Petrol station, one shop, a campsite, maybe 10km's of metalled road, one pub at another larger town down the road (population 400 tops). He was astonished at how small it was, I was surprised at how big it was. Given the 600km's of Bush and dirt roads to reach the main drag at Cooktown.

Oh and those Toyota's I mentioned they really are universal and every last one of them has a snorkel.