Set your clock back 5 years and thirty minutes. 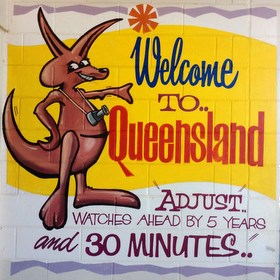 The sign on the wall of the road house in the last fuel station before the Qeensland border tells you to set your clock forward 5 years and the 1/2 hour for the time zone change between Queensland an the Northern Territories.

Yes I'm back in the Top End. Daly Waters to be precice. Stayed here last night, and tonight as well. I'm hoping I'm so far out into the middle of nowhere that the royal wedding won't be an option. Not certain about that, the chances are that out here in the outback the monachists are probably rife.

Will probably upload this is Darwin, very brief signal at Tennants Creek 2 days ago but nowt since then - there is Telstra here, my old phone worked, but the new one does not like telstra's "Next G" signal. Which is annoying.

Daly Waters is a hell of a pub, it no coincidence I've stopped here again on my way north, I thoughtaly recomend it. Been reading up in the local international air port (on hanger, over grown one muddy cessna). It really was once the hub or international air travel, and a station on the over land telegraph. Its never managed to attract a popultion in three figures mind. 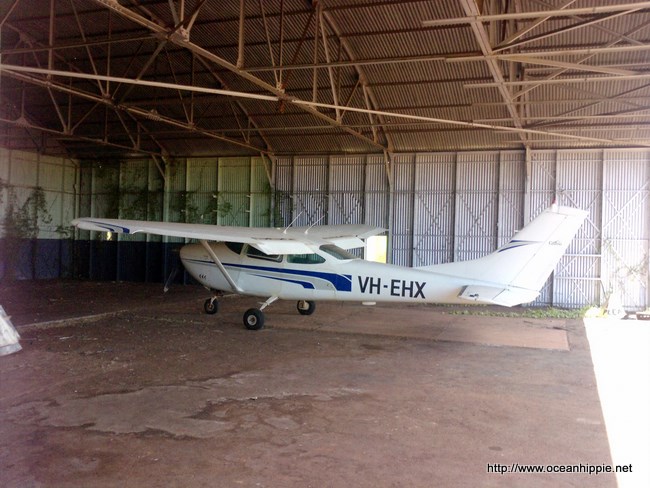 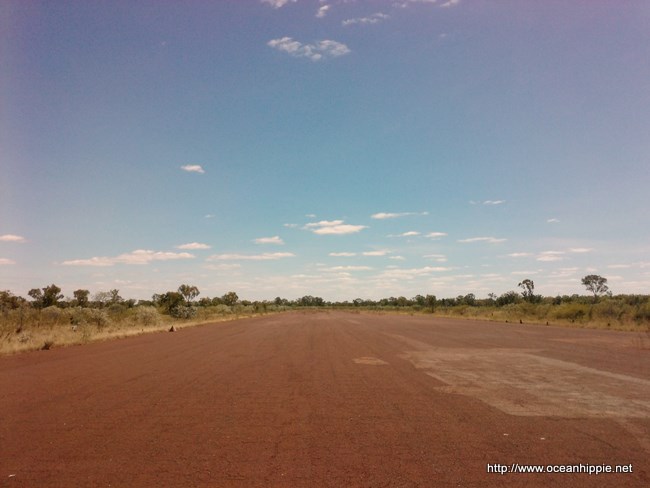 Abort Takeoff there's a Pom on the runway. 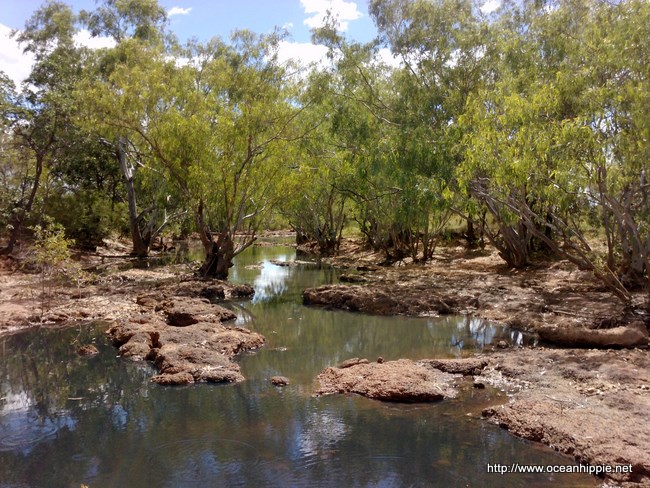 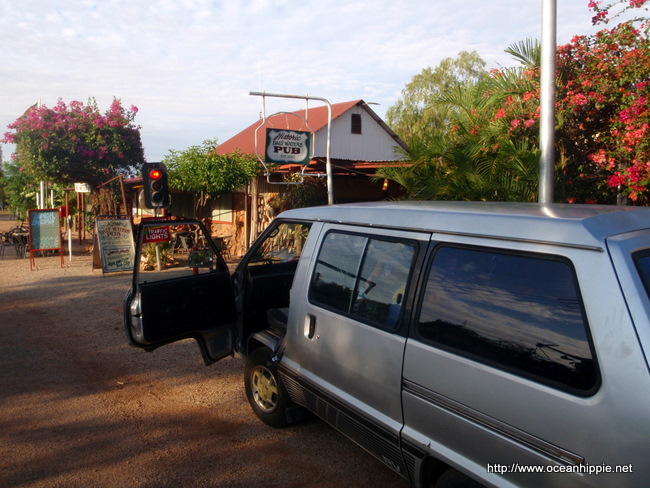 Pub (old Pic from end of Dry, much greener now after the Wet)

In the Isa (Mount Isa) been down't pit. Twas cool. Anzac day tomorrow. Wondering weather to stay or go. Probably go, aparently 60 down the road is free camping. Probably get a few beers and some ice and camp there for the night if I can find a bottleo open on easter sunday. That'll leave on more town between here and the NT.

Need to send a few mails no real reason for a blog. I posted this on Facebook after the breakdown a couple of days ago:

Once a jolly swagman camped by a billabong,
Under the shade of a Coolibah tree,
And he cursed as he saw a light flashing on his dashboard
You'll come a Waltzing Matilda with me.

Shella from Miss Tippy  has requested a musical version with me singing, I don't believe she was there for either of my last singing outings "Paint it Black" by the Stones in Nuie, and the campfire in Nuku Hiva. So I'll give her the benifit of the doubt. Believe me you don't want to hear me sing.

camped by the Billabong

I'm in Winton, again. I Broke down. 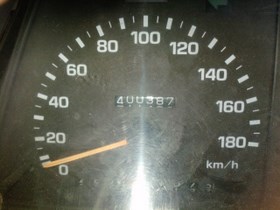 Winton is the home of 'Waltzing Matilda'. I'm sure you know it, its author Banjo Patterson ("Banjo" was also the name of his fathers horse) first heard the story at the billabong here. He wrote the words on a station down the road and it was first performed to music here, right here, in the the North Gregory Hotlel (beer and free camping). Yeah I'm in the bar, I earned it, fortunatly Central Motors, the local garage being to buisy, sugested I fix my van my self.

Think 30 degree heat, dust devils blowing through the dusty yard by the garage. Repair took hours, frustrating ones, and cost $15 dollars. I actually broke down 90km up the road, and had to drive back. That's about $30 fuel. Yes my alternator failed. Fortunately this is one of the bits of the Tarago - still unnamed, that I know well. T'was not working for three reasons when I bought it. Belt, loose conection and stuck brushes. If you don't know what brushes are that's your problem. Mine were terribly worn when I unjammed them in Darwin, so I naturally assumed they'd gone. That's the 15 bucks. It wasn't the problem, no it was a broken wire, but they were already barely in contact with the commutator. Obviouslty that ment crawling in the dust under the van, a van with 401000km on the clock, yep it finally rolled over a few days back. My other clock rolled over too, meaning I've driven it nearly 12000km.

Wire is soldered back on and taped. Black engine, back connector, right in the dark under the van, amouncst the back oil next to the other two black wires coming from a black loom. Goths may enjoy it - I didn't.

Apart from that the trips being fab, I particularly recomend the Queensland and Northern Territories Aerial Service museam at Longridge . Quantas was fomed here, in Winton, with one clapped out biplane, funded moslty by farmers, who knew even if you did order something it would take months to get out here, even when the weather allowed it to move at all, unsuprisingly it was an early Quantas airplane and a Missionary Doctor who started what became the flying doctor service.

For those of you who know Waltzing Matilada, but can't follow it a Swag is Ausie for tent, so swagman's a bit of a bum, recon I qualify. Tucker is food, so tucker bag is obvious. A billabong is a pond, a waterhole, usually in a dry riverbed - no shortage of them here. A jumbuck is a sheep - they wander here, a station (Ranch) can be 1000 square miles here abouts. A colibar is a type of tree, you don't need me to translate that bit. Billy is pot for cooking food on a fire, or making tea.

So once a jolly bum camped by a water hole, in the shade under a tree, waiting for his tea to boil, a sheep wandered up, he stole it and stuck it (or some choise cuts I imagine) in his bag, then when the cops turned up, instead of giving him self up to outback justice dived into the pool never to be seen again.

The song ausies are famous for is about sheep russling. Pretty sure I wouldn't want to be done for that rap out here, recon they'ed take it pretty seriously. I'd dive into the billabong, specially after a day under a van in desert like heat.

Bah Humbug, laptop battery dying, charges off the Alternator or did when I had one, so had a little charge before I unplugged to save lecky earlier. My have to steal some elecrons of someone. Charging Laptop v getting back to civiliseation is not hard decistion. Not out here with the Easter Weeked coming on. Could wait for ages by a billabong and end up eating somneone else's sheep if I broke fown out there. More likey the sheep'd eat me.

Things you didn't know about me

Always wanted to see your course and speed after you've been racing a sailing boat? Well now you can. I always grumped that there was no decent stuff out there to analyse GPS tracks. So i wrote some - and you can share it with the internet and the world cos i did it on line.

Its very beta at the moment, but uit will show you how fast you went, plots a graph and a map of where you did it. Reads any GPS tracks in the GPX file format.

Here it is knock your selves out.... Tom's GPS Analyser

I'm sure there is a special column running in PrivateEye to celebrate the insanity that is the royal wedding. Here's my contrbutions. 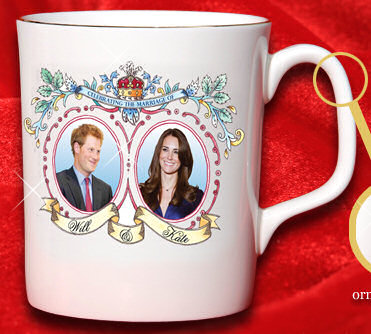 There website says "We have had a high level of interest", can't think why

Also One of my favorite islands, Niue, has had some stamps printed.

They do make a loverly couple, and if this goes the same way as the other royal weddings, you can simply tear down the dotted line.