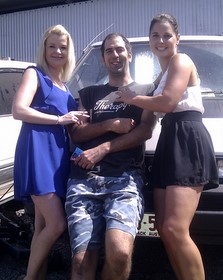 Central to Police investigations are the notorious horse traders from Southern Germany. Inspector Tom of the Yard, believes Moonlight Moonie and Queen Margie did it, and is hoping to Extradite the infamous Moonie who has fled to her hideaway in Germany for questioning in August in relation to the deodorant theft. 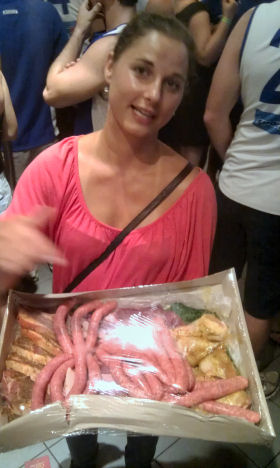 Wanted for running illegal meat raffles in the Darwin area, Margie is Moonie's partner in crime. Margie's car detailing skills are said to be so good that the Crime Scene Investigation Divisions say "after she's cleaned a car even we can't get any evidence out of it" 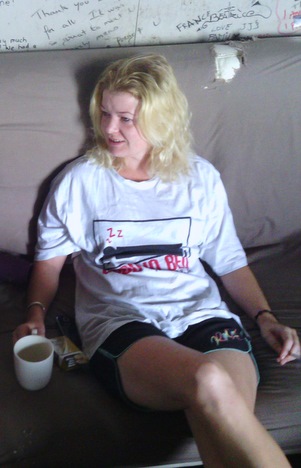 Ringleader of an infamous German Horse Russling gang.  The nick name "Moonlight" comes her moonlighting as a taxi driver. Acting as transporter for notorious "Gettaway Jimmy" she picked up 3 boguns who thought she was a Taxi rather than the "clients".

As well as the ringleaders police are investing various known associates of the Gang in the Darwin area:

know associate of the Girls, Gettaway Jimmy is Godfather of the Country King Browns and is know to provide "Vehicles for any Job, no questions asked" throughout the Top End.

Though her involvement in the crime is yet to be established her long association with Moonie and Margie and her recent departure to Thailand, a country where no extraction treaties exist is considered suspicious.

Notorious for being able gain to access any fridge anywhere, any-time. No mater how you secure you think your leftover pizza it will be gone by morning.

Darwin's well known Mr Fixit. An anonymous source is quoted as saying "If I wanted a shipment of Lynx on the back of a road train and across the boarder into the lawless reaches of outback New South Wales I'd go to John"

Firstly I am on a train in the UK, its expensive and late. Woot. I'm in first class, cos its cheaper. Which like much of the UK is insane. Apparently Revenue Protection Barriers are in place between Oxenholme and Preston. Fortunately I used to live in this benighted country and as my friends will tell you speak fluent bollocks. Even I'm slightly confused by this one I'm going to take a punt and say they're checking tickets.

This seems blatantly unfair since booking a ticket is well nigh impossible. I know I tried it. It may have been the the trainline.com's dubious business practices, or good old fashioned incompetence. Probably both. Suffice to say that after I hit pay entered my financial details it just stopped with no error, forcing me to log in to my internet bank email and various other attempts to work out what happened. Then finally ring their expensive number and have some, competent, Indian sort it out for me. Mysteriously my UK debit card (which works fine) was rejected and I was forced to pay the credit card surcharge, same system same UK bank. I can only conclude that the Great British business plan is to accidentally on purpose fleece you.

Would all person's reading this note, the trainline made me use a 2 years + dormant account full of my details, and since their website  doesn't work I can safely say their are not competent to be looking after such data. Don't touch them with a forty foot pole.

My opinion has been changed on Scottish Independence get out while you still can. England is mad, bad and stupid and the coffee's lousy. I've not had decent cup since I landed. Truck City in Berimma has better coffee, and that's truck stop. You know those tiny little pots of UHT-Possibly-Milk? I've not seen one for 2 years don't miss them at all.

To be a little fair to thetrainline.com my card has been operating a little erratically. That and the cashpoint this morning was in maintenance mode or something, but my general impression is thinks work less well here even than Darwin, which since by British standards is small town and in the arse end of nowhere is frankly pathetic.

Oooh the announcer has just prattled on about Revenoo Protection Barriers again. Nice. Yes the trains late, yes the ticket was expensive and harder to obtain than Plutonium but the sandwich, free sandwich was edible (looked posh, wasn't) the wifi works and is free the free beer is Mastons not Fosters and the lousy coffee is free. Why? Why? there are three people running up and down the coach non stop, one with a trolley, one with coffee and one with Tea. It makes less sence. How come the train is late, and yet they manage to keep it stocked with beer coffee and sandwiches to give me free when an Economy ticket was £15 more. While the cabin crew try and give me free stuff the announcer is asking people to "not put bags or jackets on the seats" "Were having a real problem with dirty seats" so they're quite happy to have 3 - oooh she's new, 4 people give me free stuff but not clean the seats.

Your Country is Insane!

And freezing cold, and probably in worse straights than you realise. The sheer number of older folks in Sedbergh brought it home to me. There are very few in Darwin, the lady next to Mum's house's Daughter moved to Cyprus most of my friends from my generation are splattered though out the globe, the lady across the road's son has been working in NZ for a year. Darwin has few old people - young people are too buisy moving into it. England is banging on about immigration as usual, and meanwhile the educated, skilled are leaving and the old and the unskilled are left behind as far as I can see. Scary stuff.

Other stuff I don't miss  Driving on Motorways, listening to some poor Old Lady "saying it took my 20p and didn't open" to the huge Berlin wall style steel electric wheel chair capable barrier out side the Public Loo in Kendal. Given Kendal's small size the sheer scale of the thing + the (obviously required) maintenance and the pathetic revenue, which is presumably collected, accounted for and banked the running costs must be so high I'll bet good money you could open another toilet block, and pay to have it cleaned for less money than the stupid barrier costs. If it makes money I will gladly eat the the next railway sandwich out of the Kendal Lav's Urinal.

I'm pretty sure that a barrier like the one above wouldn't survive its first 20p swallowing in Darwin, People of Kendal if the barrier rejects your 20p or swallows it your are perfectly entitled to break in, if fact your are moral obliged to do so. If you don't your robot toilet barrier masters and the idiots that commissioned them will rule your lives for ever. Oh there go Blondie the coffee lady and Ginger with the Tea. If my typing goes its the blood in caffeine and alcohol stream. Where's sandwich man and beer lady?

I give up, I'm going home to the drink drivers lethal weather and killer wildlife it makes more sense.