Sorry to blaspheme so badly, but I have snot pouring out of me faster than Neil from the young ones. The only think thats more inclined to make me blaspheme is the newly acquired extra hot pepper sauce.

Our first arrival in St Lucia on Ramprasad was on a Sunday, the only open place being the petrol station, where we obtained a bottle marked "Local Pepper", written in permanent marker on a gummed on label. Re used bottle of course. It was lethal. Simon fried some of it with plantain. The results can only be described as mustard gas. It led to the evacuation of the boat

The new extra hot stuff, bought from the market in Castris is pure dynamite, Katrin was a little in cautious last night. Steam came out of her ears, she looked like Wily Coyote having swallowed some Acme(tm) TNT. She reported it cleared her sinuses wonderfully. Helped mine too. Made my eye's water, but there doing that anyway I've such a bad cold.

I'm slightly concerned I'm unable to contact "Jackal" who I was hoping to sail with, originally from here, but now possibly from Grenada. I would feel a lot happier, even if I have to get to Grenada, If I knew where she was. Or even where and when she was was going to be. If I don't work this out I may well have left it too late to find someone else. Which would be a bit of a problem. 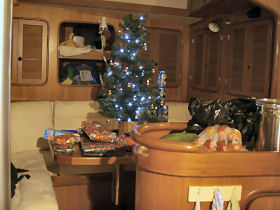 Merry Christmas to anyone/ everyone. Hope the English weather improves.

Christmas shopping in downtown Castries is more fun than Brighton. That's not saying much, its also a lot hotter, its already 30 degrees outside. Ipod accessories are hard to find. Ipod sales in St Lucia can't be high. I suspect cos you can't turn the base up enough. Base is very important round here.

Main chrismas plan is to hit the beach and have a barbie. More apologies to the English audience. Yes I have heard about the UK weather forecast. Sorry, if its any consolation its too hot here right now. Last night I slept lousy. Too hot and sweaty.

Twas the night before Christmas and all through the boat nothing was stirring, except for a soaking wet Caroline who'd been in a dinghy that ran out of fuel in the middle of a squal...

Will try and upload this before I go to the beach. Had rum and banana cake for breakfast. Hummm Rum.

Andrew Bishop, head ARC honcho's microphone don't work. Sound engineer has gone to Castries. The last words we heard from him was "Turn it up". Somebody did, the feedback reached an ear-splitting crescendo. I mean loud (this is the Caribbean) and the blew the main power and out went all the lights.

So we all went out for more rum punch! Which caused trouble cos. I'd had the foresight to bring in a couple of spares. 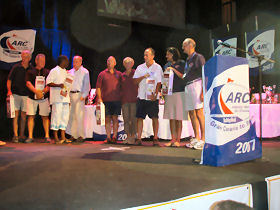 Eventually power was restored. We got an honorable mention as Steve was a net controller.

Flute II's crew's a mate, he'd got bored of the prize giving and was outside when they won their class. Ooops.

The Crescendo of the prize giving was balloons falling from the ceiling. They were all wrapped up in a long tube of bin liners. The whole tube fell down intact. There was a then a frenzied banging as the 28 ARC kids tried to get the balloons out.

Several awards went to people we knew. The "Spirit of the ARC" went to the couple on Hippopotamus, 2 nice Germans on their honeymoon. Hippopotamus is very hard for a German to say, which is why they chose the name - to irritate harbour masters customs officials etc. That award was well received as 2 days previously they'd, despite being a small boat, hosted a very large party which blocked pontoons all around them.

Flute II, Tulla, and another boat were all mentioned in relation to the boat load of Immigrants they ran into. Tulla was reportedly boarded by 2 of them and had to restrain them, the other yachts got chased by the boat. I've spoken to Neil on flute, they were 400Nm past the canaries and the boat had 48 people on board and no compass. That far into the Atlantic they were in serious trouble. With that many desperate people on board so were the yachts. After much wrangling they were picked up and taken to Gran Canaria. Apparently 2 of the immanent had died prior to the Yachts finding them. Many many people try to get from Africa to the Canaries, in dreadfully inadequate boats. Many die. It is tragic. I've no doubt given their location all of this lot would have died but for being found by the Yachts.

Mention was also made of John Thompson, who died on route to hospital in Barbados after an accident during the crossing. A trust has been set up in his memory to fund an Organ Replacement clinic in Barbados for the Caribbean, details of donation address will follow when I have it. 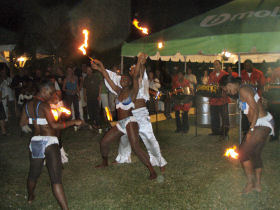 Caroline has managed to get a House, in Gros Islet. Or half of one, you know kitchen diner, bedroom, bathroom, fridge freezer, goat etc. So after we’d demolished an awesome amount of free beer. Listened to the steel band and congratulated people. We went to her house, petted the dog, met the goat, bought beer from the shop next door and put it in the fridge. Then on to the Jump up in Gros Islet.

I didn't dance I just looked drunk and nodded my head and drunk more beer of course. Hangover V bad this morning - wireless internet is worse....

St Lucia now has roundabouts, it didn't last time I was here. The locals blame the English. Apparently they were introduced by the British to keep them down, post colonial medaling and all that.

Went zip lining through the rain forest today. Fun! Twas the guide that came up with that thought. He also said:

He's right you know. Well maybe not the bit about the roundabouts.

He gave us some tips on different Lucain rums, Chairmans reserve, Admiral Rodney (platinum award winner) and "element 8" or possibly "8 element" he couldn't remember. He said "drink element 8 and you won't know who you wake up with. You'll get there in the morning and say 'who's she', roll over and go 'and who's she?' then try and get out of bed and work out who the girl on the floor is as well." Must be very good rum......

Add that to some euphemisms I've heard, inducing "badgers nose" when you've been to the loo in the night and poke her with the wet end and "crashing the yogurt truck" which I'll leave you to work out. All this means I've learned stuff this week.

Did I just put that on the internet? Ooops?

Will do some rain forest pics when I have a bit more time. Determined to go to bed before midnight, rain forest knackering. Yesterdays it took 12 hours of hair of dog to recover from the party the night before. Think I've found a boat heading for OZ thought so everything looking good.

We've all been watching my name is earl. Karma is a very fashionable concept.

In 1998 I left my sun glasses on a rock on Reduit Beach. I remembered and went back for them, too late unfortunately they'd gone.

Today while wading ashore on Reduit Beach, in about 2 feet of water were some sunglasses. The old pair I lost were cheap and nasty. Now I have some rather natty oakleys. Karma dictates I should track down the owner. However this is the Caribbean and that sounds like hard work. Also things on land and things in the sea are different. These were in the sea. So thats salvage, not theft. I doubt they are jetsum, more likely flotsam so its salvage.

I bought a mask snorkel and flipper set for €22, the mask didn't leak at all. In fact its great for spotting sunken sun glasses. Nice buy.

I should fix that Google earth thing, while this goes up, its link is:
http://www.oceanhippie.net/content/pic/gal/ARC%202007/ARC%202007.kmz
Hopefully the file will actually upload this time.

Either that or I will blow it up with an exploding life jacket. These wonder full gadgets auto inflate when you fall in. Woot. Since I haven't fallen in however I can't vouch for that. They defiantly go off when they get wet.... We've had 2 spontaniously explode into fully inflated mode.

An Atlantic Crossing in Pictures

Take one Digital camera, one GPS, an ocean and Google Earth and you can gps your pics and attach them to Google earth.

NOTE: you need to have Google Earth installed for this to work, its a free down load!

Use the following link to view my Alantic Crossing route and some select pictures from it.
http:// www.oceanhippie.net/content/pic/gal/ARC%202007/ARC%202007.kmz

There'll be a conventional photo gallery too.
Also I have added an RSS feed for you geeks out there, this blog only full content else where.
Tom